I generally like most tech I review.  I have mixed emotions here but this may be a cluster f*** of my own making.

I dig home automation.  There is nothing better than asking a smart device to turn on a light or a fan or effect lighting or play a song …………and it works.

I’m a long time user of HomeAssistant .  It was kind of hard in the beginning but it is super smart and more intuitive now. Again, you don’t have to go off the deep end.  Turning a light on and off or hooking up to your thermostat can be huge.

I’m a big fan of taking Internet of Things (IoT) devices and flashing them with open source firmware such as Tasmota.  And my house was AWESOME.  But then I moved and I had to start all over.  ESP8266 is kind of slowly being phased out by ESP32 chips and Sonoff devices have some competition now such as Shelly.  I had seen the Shelly 1 a couple years back but opted to stick with Sonoff devices.   Fast forward a couple years and Shelly has really advanced.  They have some cool offerings and I decided to give them a trial run.

So since I’m starting over I grabbed some Shelly devices.  The internet bubbas love them. But I wonder if they have ever deployed them other than in lab conditions for a YouTube video because I had a hell of a time with my first installation.

So here we go on my Shelly review.  My older house has no neutral so I started with a Shelly 1L. I put the first one in a the back yard shed in case it burned something down.  Right off the bat I have a few things going against me.

I had a hell of time getting this installed.  Oh, no, not the hardware hookup.  Their schematic is great.  Basically you chop the hot wire and hook the wall switch up to the Shelly. 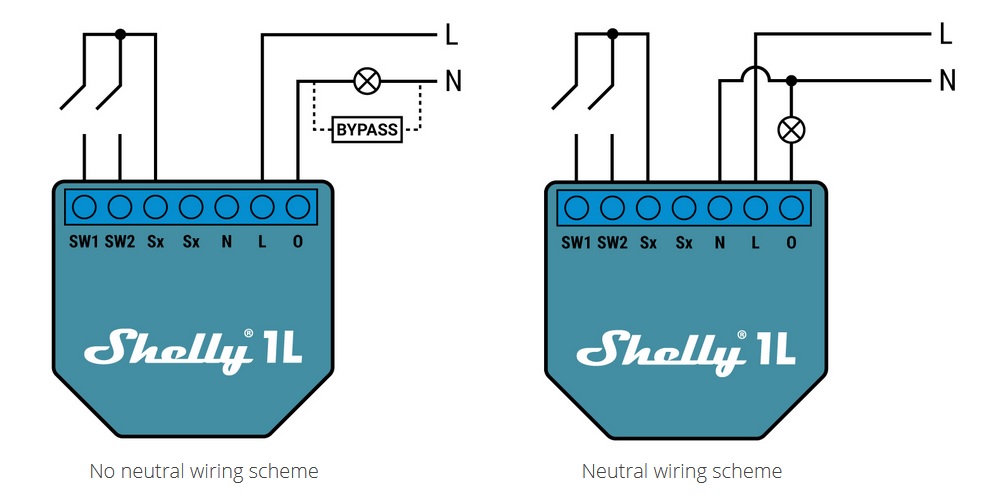 That’s great.  First let me say the screw down terminals are SHIT. It was a struggle to take the existing 14 ga. wires to screw down into this securely.  So right away I worry about the robustness of this device.  If my shed has 14 ga. wire then holy mother of fuck the device should accept 14 ga. wire.   It BARELY does after some Tom Fuckery.  I don’t like Tom Fuckery with my home electrical wiring.   But I’m still in the shed.  THESE NEED FERRULES CRIMPED OVER THE WIRE ENDS BEFORE INSERTING IN THE SHELLY.  Sadly I don’t have a ferrule kit, but I will in a couple of days.

Once I got it hooked up in a fashion that I thought was safe (you really should use terminal connections) I went to hook it up to my network.  I’ve watched a dozen videos of how easy it was.

Those people obviously don’t have any kind of real network security.  I have a hardware firewall and my firewall caught several instances of questionable Cloud connections.  Yeah, my firewall is locked down a little heavy. I know this. But still.

So I whitelist the issues and fuck I still cannot get the thing installed.  Somehow or another I finally get it installed to my wifi (and again my wifi signal is weak at the shed)  and I disable the cloud.  I wish I knew what I did to make it work here but installing via the app was a crap shoot.  I think the best method (which I did not do) would be connect to the Shelly wifi hotspot and navigate to192.168.33.1 to set it up.

Once it is configured if you find its IP address you can navigate to it and control it locally.  I am not a fan of Cloud configuration.

It’s a bit like Tasmota, only better polished and more intuitive in my opinion.  That’s not a knock on Tasmota.  I LOVE TASMOTA.  I think you can wickedly exploit Tasmota much more.

Here’s the good news.  Home Assistant finds the Shelly and EASILY configures it.

Then I added it to my UI (Lovelace)

It adds a binary sensor for overheat conditions which is COOL. But darned if I can find any evidence of it in the Shelly app.  You’d think they would exploit their own sensors.  Or maybe I just haven’t found it yet.

So I got it working but it was a GUN FIGHT.  And I have to say the screw terminals are NOT robust enough to handle Romex wiring of 14 ga.

I’m going to leave this in the shed before I put one in my house.

Actually I think it may work fine in the house, near the wifi and now that I have all the firewall pass rules in place.

Tasmota devices work.  And so do Shelly devices but it was HARDER THAN IT SHOULD HAVE BEEN.

So what did I do?  I ordered the dimmer module, the Shelly 1 and the Shelly Flood detector.

I’m not prepared to give up on them but ultimately this is about ELECTRICAL safety.  SHITTY ELECTRICAL CONNECTIONS ARE UNSAT AND UNSAFE.

Update: After a couple days of monitoring the shed Shelly 1L I installed one on the switch that controls the front yard light post I observed the following:  For some bizarre reason the fixture outside is those super small sized teeny tiny lamps.   I don’t know the A designation but they are like ceiling fan lights.  After hooking the Shelly up …………. I still had issues with the house wiring being able to be tightened down in the terminals for Line and Load.

Make no mistake.  This is bullshit and basically unsat.  I ended up taking hook up wire rated for more than 120v and 650 degrees and wired everything up with wire nuts.   It’s safe, I know it’s safe based on the load, but it is still bullshit.  One gotcha I discovered is the Shelly 1L DIDN’T WORK.  After sticking my head in the manual I found that the 1L had to have a minimum load of  20 watts.  I live in a house built in the mid-80’s which I just know has man sized light bulbs in the  light post outside.

So after much fooling around I walked outside and there were 3 tiny lamp sockets with only one lamp lit and that lamp had a 5 watt LED in it.  Well, I’ll be damned. I found a tiny incandescent lamp and took it outside and son of a gun the Shelly 1L came to life.   I guess I need 3 10 watt LED’s or so.

So, none of this is Shelly’s fault.  The fault is mine for not verifying the load.

But know this.  The terminal connections are SHIT.  Shit.  But once again I have to say they are safe.  If you have one switch with 120 volts and maybe a 50 watt load on it you don’t need maximum gauge wiring.  But it’s your house.  The wires in your house should plug right into the Shelly.  They don’t.  At least not in my house.

So I have two Shelly 1L’s installed and I do believe they are safe installations.  But if Shelly ever sees this……….make the terminals more robust and slightly larger to accommodate existing house wiring.