Casio has a line of wristwatches that utilizes something called Multiband 6.  What that is is a radio receiver which allows the watch to receive a signal from WWVB in Fort Collins Colorado which keeps the watch synchronized with their atomic oscillators.  There are also transmitters in the UK, Germany, China, and Japan which provide the same service.  If you have a Multiband 6 watch and travel it should sync with the perfect time most anywhere.  The actual definition of Multiband 6 is that is the number of transmitters that the watch can receive from.  There are six such transmitters.

The station WWVB is run by the National Institute of Standards and Technology (NIST) which maintains the time and frequency standards and makes them available to the American public.   The signal is broadcast on a frequency of 60kHz with a 70kW signal.

NIST was on the chopping block about a year ago by our esteemed government who decided to shut it down.  Then at the last minute it got a reprieve.  While losing the ability to sync a Casio G-Shock may not be catastrophic there are many time sensitive computer and clock devices that even the US government and scientific fields NEED.  Shutting down would have been problematic.  This web page gives a list of manufacturers and what services they use WWVB for.  Much of it is academia and scientific research and GPS usage. Shut down NIST and GPS’s might act weird.

In a similar vein many clocks on AC use a chip that is timed by the 60 Hz AC cycle in our electrical grids and in fact I recall seeing articles about a year ago that European clocks were losing time due to 50 and 60 Hz frequency cycles.  Depending on where the power was coming from your clocks could be running 6 or so minutes slow a day.

Back in the day a company called Telechron made clocks that kept awesome time by using a synchronous motor that used the 60 Hz cycle for timing.   Using frequency to keeps things timed has been utilized for ages.  This is not a new technology.

Anyway back to the coverage zones.  The maps above from Casio make it look like you can always get the signal.  As I type this it is about 0730 which is 1230 UTC.  Here’s what the NIST webpage says the signal is like at 1200 UTC under normal condition. 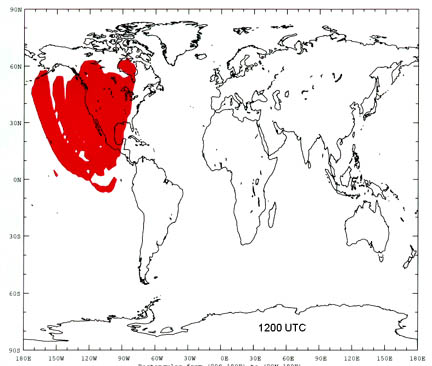 Yikes.  I’m left out as a resident of Eastern North Carolina.  The default sync time on the watches though is usually the middle of the night.  Here is 0400 UTC which is about 2300 or 2400 EST depending on daylight savings time. 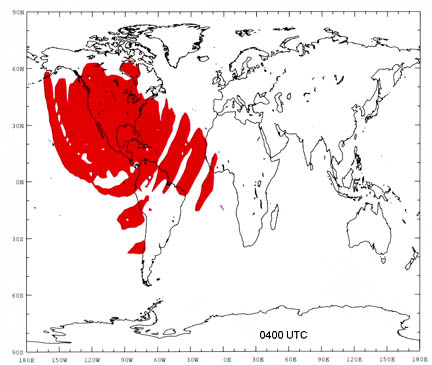 MUCH BETTER COVERAGE.  So this is typically why your G shock wants to sync the time in the middle of the night.   Even with this coverage I find that my watch seldom syncs in North Carolina unless I put it in the “magic spots” in the house.  One such magic place is between the slats of my bedroom window blinds about eye height.

I wish I were joking about this but I’m not.  That is where I have to put the watch at night if I want to ensure it will sync.  Also setting it outside on the back porch will generally ensure a good solid  radio signal and sync.

I recently went to Yuma AZ for work for a week or so and the watch sync’d up every single night in the hotel room and hotel rooms are generally Faraday cages.   Anyway Multiband 6 works way better out West than it does in the Croatan National Forest in North Carolina.

Hey, can’t have everything I guess.  At the moment this is my only Multiband 6 watch so I’m curious if others have better receivers or not.

As a licensed Ham Radio operator I get a gigantic kick out of knowing that my wristwatch is synchronized from a long wave radio signal.  Just to put that in perspective, Short Wave radio is about 3-30 MHz and Medium Wave (which is what you call AM radio) is about 525 – 1705 kHz.  Long wave is anything below medium wave so 60 kHz falls within the long wave radio spectrum.

Hope that you learned something about your Multiband 6 Casio’s that you did not know.  As a Ham Radio guy I can tell you that radio signals are big fun!  Enjoy!